Mercedes-Benz currently manufactures its most successful model, the C-Class, at four sites around the world: in Bremen, in Tuscaloosa in the USA, in East London in South Africa and in Beijing. Four sites on four continents, tens of thousands of employees, countless model variants – this is the Champions League of logistics.

And Andrea Schreiber is a key player. As head of production start-up logistics at Mercedes-Benz in Bremen, she ensures that everything runs smoothly whenever there is a new model or when there are changes to the current model. And not just in Bremen, but at all the other plants. “We ensure that every part is available in the right place at the right time, and with the right quality, whenever a new model or other changes are pending. We coordinate the suppliers around the world. This requires considerable skill and attention to detail,” says Schreiber, who was born in Stuttgart and has been living in Bremen for 30 years.

In its role as lead plant, the C-Class manufacturing facility in Bremen fulfils a range of tasks for the model series, such as planning capacity and production trials, managing international deployments and coordinating parts for production start-ups. This means considering questions such as: which model variants are being built where and in what quantity? When will changes in production be adopted? How can I ensure that all parts are in the right place at the right time? When can suppliers deliver parts to which site?

The site in Bremen is always the first to run a C-Class start-up. Cars are initially built in Sindelfingen during the pre-production phase, during which final teething problems are fixed and manufacturing defects are identified before going into full production. Once this has been completed, the production tests start at the lead plant in Bremen, and the experience gained here is passed on to the other production plants. In some cases, the vehicles are integrated into series production at an early stage of the product development process at the lead plant in Bremen – there are no separate assembly lines and factory halls. “You just feel like you want to be there and supervise every step,” says Schreiber with a smile. 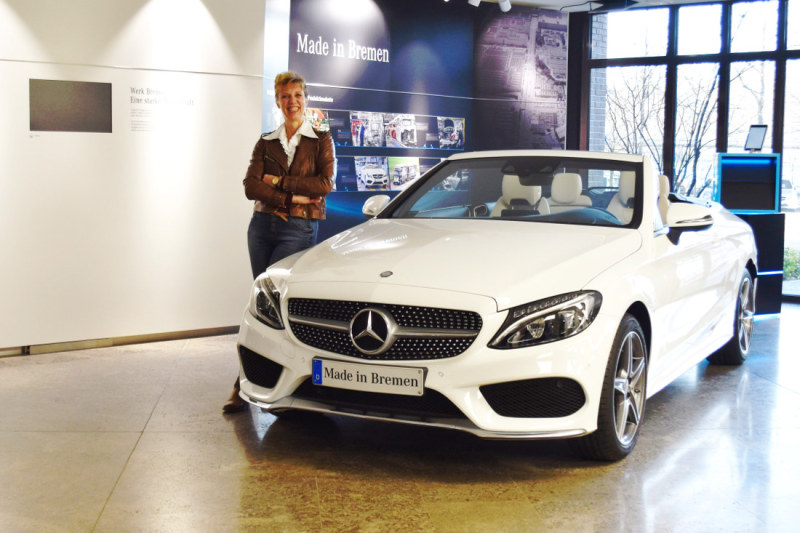 Bremen also provides training for teams from other plants. Over a period of 4 to 6 weeks, employees from the USA, South Africa and China are taught the most important skills, which they then pass on to their colleagues at home. Once series production starts in Bremen, the other plants follow suit soon after. The parallel ramp-up phases are the busiest months for the logistics experts in the Lead Plant C-Class unit.

Working closely with the Development unit

Despite the highly modular nature of car manufacturing, every new model generation has its own assembly methods and new logistics processes. The start-up department is involved from the start. Things start to get busy 18 months before a series goes into full production, and a year in advance the first vehicles are manufactured.

Firefighting around the world

Bremen’s role as the lead plant is not only in demand whenever there is a new model. Schreiber and her 60-strong team are kept busy all year round. Each part is changed four times on average over the course of a vehicle generation, which may also involve changes to the production processes. Schreiber calls this firefighting: “We maintain a constant dialogue with suppliers and the plants. It’s these daily challenges that make the job so exciting. ‘Can’t be done’ doesn’t exist for us. Somehow we always manage to find a solution in time, either here in Bremen or in the international plants,” she says.

Growing into the lead plant role

The lead plant role was first introduced with the launch of the current C-Class series in early 2013. As she has been there from the start, Schreiber has learned a lot in recent years. “Initially, we didn’t know how far we had to get involved in controlling the logistics processes at the international plants. After all, the other sites had been successfully manufacturing Mercedes-Benz models for years. Now everything is well rehearsed. We all learn from one another, we share our experiences, channel our expertise and continually improve. Progressing as a team is what motivates us,” Schreiber explains. Rather than inhabiting a pure leadership function, she sees the lead plant’s role as that of a mediator and conduit of knowledge.

Why it is sometimes more efficient to be less German

The initial phase was anything but simple: “We started off by visiting our partner plants, but we soon realised that our direct, formal approach wasn’t making much progress,” Schreiber admits with a grin. Other countries, different cultures – and that applies particularly to the world of work. During a visit to the plant in China, the first week was spent getting to know each other. Only once everyone had made a connection at the human level was it possible to have meaningful discussions about work. 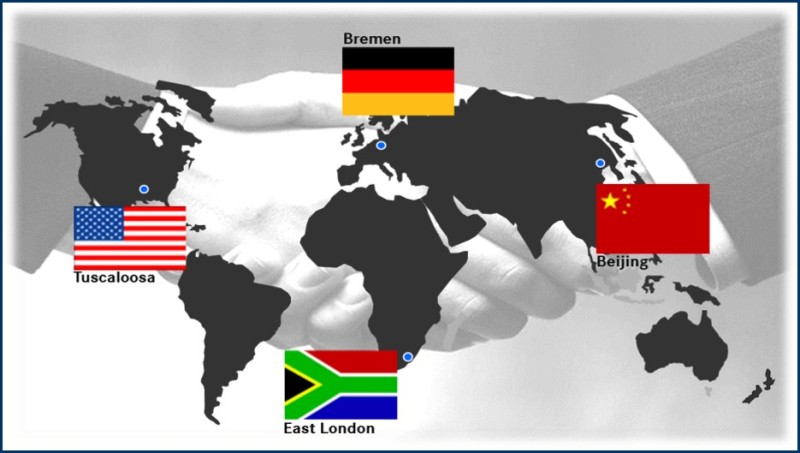 Around the globe: The C-Class production of the current series © Daimler

Today, getting to know each other and embracing foreign cultures are a fundamental element of her work. “We don’t really reach people if we only communicate at a formal level. Once we have established trust and confidence, we can get things done quickly and easily. Getting to know each other has a direct impact on efficiency. Only once I know my counterpart well enough that I am able to recognise his voice in a conference call will I know that I can work with him effectively. Building a relationship based on trust by getting to grips with cultural differences and through mutual respect is half the battle,” says Schreiber.

Car production around the clock

English is the lingua franca in her department, which is often visited by colleagues from the partner plants who come to work and to gain experience. The plants stay in regular contact through conference calls, which take place twice a day due to the global nature of the network – in the early morning with China and in the late evening with the USA. Every year, Schreiber spends a week at each plant to maintain her contacts there.

Travelling the world – at home in Bremen

Originally from Swabia in south-west Germany, Schreiber now feels at home in Bremen: “I love the variety of arts and entertainment on offer, the mix of new and old in the Schnoor and Viertel quarters, and the excellent quality of life. I really enjoy living here.” She appreciates the flexibility that the site and her team offers, and she regularly brings in young talent to provide them with training. There is just one habit she cannot break – her Swabian dialect. “Well, I do have to fly the flag for Swabia up here in the north,” she says with a wink, before being called into the next conference call – the USA is on the line.

To find out, which cars Mercedes manufactures in Bremen, look at our overview of "ten models made at the Mercedes-Benz plant in Bremen".

Bremen is expanding. Several construction projects will reshape the city centre. The 2018 Bremen property market report – an overview of office, logistics and retail properties, and of investment market trends – confirms that the city is an attractive location for investors and developers.

Find your match
Automotive Industries
Is this the office of the future?