Information and interesting facts about the Turkish economy 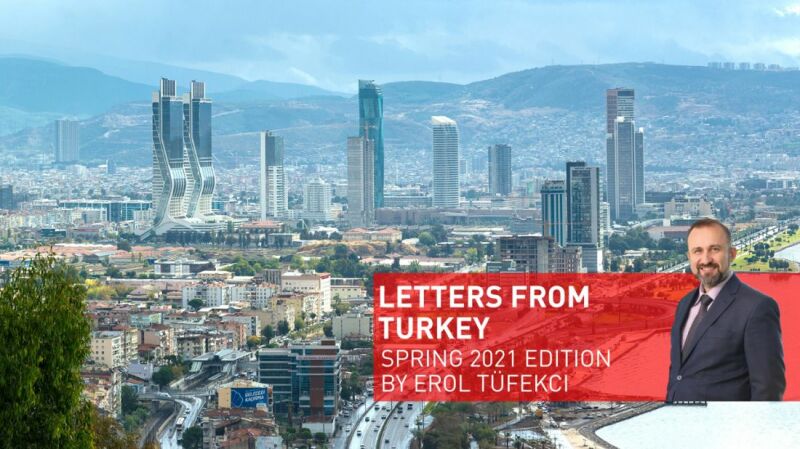 Holidaying in Turkey in 2021 – might that be possible? How has the Corona crisis affected the Turkish economy? Our Spring country report covers this, and many other topics.

Erol Tüfekҫi, Director of the Bremeninvest offices of Wirtschaftsförderung Bremen, reports directly from the port city of Izmir, sending quarterly overviews of the trends, opportunities and new developments in Turkey.

Our topics in May:

The Turkish economy – sunlight and shadow in the Mediterranean

Turkey forecasts a significant recovery in its economy in 2021 © pixabay

The Turkish economy will make a rapid recovery from the Corona crisis, with an expected economic growth of five percent in 2021. In fact, Turkey was one of the few countries whose economy grew during 2020 (by 1.8 percent). The country is now ranked 11th largest national economy world-wide. In particular, this is thanks to Turkey's robust export sector, which saw growth of between 16 and 20 percent. The recovery of the EU's economy and the associated increase in demand has also benefited the Mediterranean country. The EU is Turkey's biggest trading partner. Although the pandemic caused a noticeable drop in foreign direct investment (FDI) in Turkey, the fall was less pronounced than in other regions of world.

However, now as before, the high rate of inflation in Turkey continues to be an obstacle for its economy (German). Running at a rate of 17 percent in April 2021, inflation has resulted in constantly rising prices for Turkish consumers, suppressing demand in the domestic market. Less affluent sectors of society have been especially affected by the increase in prices. The price of Turkish exports has also increased, which could also cause a drop in demand for Turkish products overseas in future. At the same time, the demand for cheap foreign products continues to grow, bringing with it an increase in imports. Turkey's import volumes have outstripped its exports for many years (resulting in a trade deficit). In recent months, a reduced demand for Turkish products, the high inflation rate, companies with significant levels of foreign debt and political uncertainty have led to a major devaluation in the currency, which has caused the Turkish state additional financial difficulties when purchasing foreign currencies.

Fighting inflation, to ensure Turkey remains attractive to future foreign investors that want to see stability and a secure business environment, is one of the state's most important tasks. However, despite all the unknowns, many investors continue to forge ahead with their plans. Thanks to its youthful population, close links to the EU, low labour costs and strategic geographical position, Turkey is still an attractive place in which do to business.

Turkey has managed to halt the exponential rise in infections of the third wave of the pandemic in its tracks, and bring the incidence rate back to under 100, by imposing a stringent lockdown from the end of April until mid-May (extended until June in some places). This is not only a good sign for the people of Turkey, but also for tourism. Although tourists weren't affected by the lockdown measures, the fact that restaurants and cafés were closed, the high infection rate and the resulting feelings of insecurity, meant that the first few months of 2021 were a disaster for the tourism industry.

The same can be said for 2020 as a whole: the number of visitors to Turkey dropped by around 70 percent and revenues fell to just about two-thirds of the previous year, 2019. Tourism is an important part of the Turkish economy, generating five percent of its gross domestic product, providing employment for eight percent of people of working age and bringing in foreign currency. Due to the nation's negative balance of payments, these are all important factors for the Turkish economy.

Of course, whether tourists will return is not just down to what happens in Turkey itself: the countries from which they depart must also make it easier to travel. Russia, the most important source country for people travelling to Turkey, cancelled the majority of flights from April until the beginning of June. Germany, the second-most important market, has issued a travel warning for Turkey. Travellers returning to Germany must present a negative PCR test.

The future of the travel industry in Turkey continues to depend on the vaccine roll-out and the associated increasing relaxation of pandemic measures in other countries. However, Turkey has prepared itself well for the return of sun-, sand- and sea-lovers.

The Turkish aviation and aerospace industry will take centre stage at the major TEKNOFEST trade fair in September 2021. This festival, which will be held at Istanbul's Atatürk airport, is designed to attract technical experts and the general public alike. With its many competitions, seminars, air shows, exhibitions, a hackathon, meetings and conferences, the trade fair will, no doubt, attract visitors in their millions once again. It is also an excellent showcase for the burgeoning Turkish aerospace industry.

Its location is also ideal for growth: Turkey is a ideally situated transit country for passengers and freight in the Near East. Istanbul Airport is one of Europe's busiest hubs and has recently undergone a major expansion. The aerospace sector is also growing: in 2018, Turkey created its own Aerospace Agency and built its first national communications satellites. In 2021, Turkey published an ambitious roadmap for space exploration, which even includes its own mission to the moon.

This trade fair is also an excellent starting point for foreign investors that want to become involved in the Turkish aerospace industry.

With around 18 percent of its population already vaccinated, Turkey is currently 14th in the global vaccination ranking. Turkey has approved the use of the Biontech vaccine, the Russian Sputnik V vaccine and the Chinese CoronaVac vaccine. Now that the very oldest citizens, and health care system employees, have been vaccinated, Turkish citizens aged 55+ can now be vaccinated. Many younger people are also hoping that their turn comes as soon as possible.

Due to the high numbers of people aged 65+ who have not yet been vaccinated (23 percent), the Turkish government has also started a vaccination campaign to reach this sector of the population, especially those living in rural areas. These people will either be telephoned or called in for a personal meeting with a medical professional and partners from the local community to have the benefits of the vaccine explained to them.

Alternatives to meat and fish, and meat grown in a laboratory, are about to revolutionise our eating habits. In this newsletter, we're going to take a closer look at this industry and showcase ten extremely promising start-ups from around the world.

The opportunities and risks of doing business in Vietnam and Germany's smallest Federal State on the big stage that is Vietnam – these are some of the topics in our Spring 2021 regional report.

Gifts of digital money from the government and a region with opportunities for German companies – just some of the points covered in our China newsletter.

to GTAI
News
Employing staff from outside Germany

The Germany Skilled Labour Immigration Act (Fachkräfteeinwanderungsgesetz), which came into force a year ago, is speeding up and simplifying the process for attracting and employing skilled workers from outside Germany. In Bremen, the Gesundheit Nord hospital group has also been able to attract healthcare workers from Mexico, thanks to the German Government's recruitment agreement.

Learn more
News
Bremen Advertises Itself in the United Kingdom

In order to attract companies based in the United Kingdom to locate in Bremen and to strengthen mutual trade relations, Bremeninvest, the foreign brand of WFB Wirtschaftsförderung Bremen GmbH, has been active in London since January 1, 2021.

What makes Vietnam – a socialist state – so interesting to western companies? In this edition of our country newsletter for Vietnam we seek to answer this question, and we also report on the country’s most exciting start-ups.