Facts and information about business and investments in Vietnam 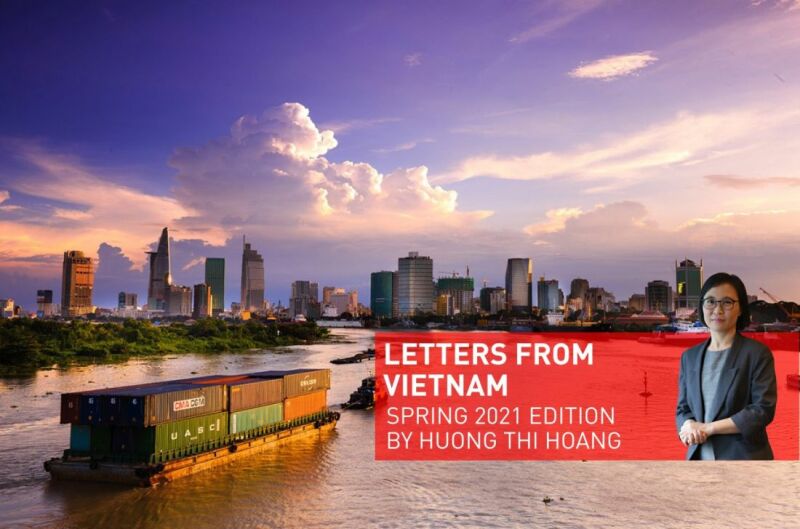 The opportunities and risks of doing business in Vietnam and Germany's smallest Federal State on the big stage that is Vietnam – these are some of the topics in our Spring 2021 regional report.

Our topics for this Spring:

Opportunities and risks – an overview of trade and business in Vietnam

Vietnam is a turbo-charged economy: it is growing faster than almost any other country in the world. With its 100 million inhabitants and proximity to China, Vietnam is both an interesting marketplace and an ideal production location for Western companies. However, the many opportunities presented by doing business in rapidly developing countries are associated with risks for which companies have to be prepared.

The opportunities and risks present in Vietnam are detailed in our overview report, "Trade between Vietnam and Germany – benefits and disadvantages for companies and investors"

Economic growth and foreign investments in the year of Covid-19

Vietnam's economy is booming, with one of the highest growth rates world-wide © pixabay

Vietnam was one of the very few national economies in the world to record positive growth in the pandemic year 2020 (2.91 percent). The construction, production and supply industries grew strongly, whereas the logistics and service sector only showed the first signs of recovery in the last quarter of the year. European companies such as DHL, Kuehne & Nagel, DB Schenker and Bremen's freight forwarder, C.Melchers, all benefited from this growth despite greatly increased container transport costs, up by a factor of ten for shipping.

Although the region around Ho Chi Minh City continues to attract the lion's share of foreign capital, Bac Lieu, a small province on the South Coast, was the site of the largest single project last year, involving a 4 billion US dollar investment from Singapore. This is to be the location of a gas-fired power station, with a generating capacity of 3.2 gigawatts. The region hopes this large-scale project will attract further investment in sectors such as renewable energies, agricultural equipment, trade, services and tourism.

A prominent investor which also hit the headlines in Vietnam last year was Foxconn. This Taiwanese supplier for the Apple group is building a production plant for iPads and Macbooks in Bac Giang, to the north of Hanoi. This project is in line with Apple's "China plus One" investment policy by which the group intends to diversify its production throughout the region. Not only will Apple benefit from more favourable manufacturing conditions, but it will also avoid any potential trade disputes between the USA and China by having production facilities in other countries. Vietnam is one of the foremost beneficiaries of this development. The new Foxconn manufacturing facility is not merely an extension of existing capacity: according to media reports, the group is actively relocating production capacity from China to other countries. A new Foxconn factory is also currently under construction in India.

Bremen presents itself to Vietnam

The "Bremeninvest Info Day" in Vietnam, at the end of March, was a great success. More than 120 guests came along to find out how to use Bremen as gateway to starting their own businesses in Europe. Local producers also showcased their own goods as potential products for export. The event was covered by Vietnamese television and the press, appearing in numerous newspaper reports.

Speakers included not only Bremeninvest's office Director, Huong Thi Hoang, but also representatives from businesses such as the Bremen freight forwarding company Karl Gross, who talked about the opportunities that Bremen can offer to local companies that are looking for new markets. Bremen's excellent port infrastructure and wealth of high-tech industries are major plus points.

The event was co-hosted by the Investment and Trade Promotion Centre (ITPC) Vietnam, a business centre specialising in the marketing activities associated with trade and commerce, such as trade fairs, seminars and similar events.

Will we soon be driving Vietnamese cars? And why has the Corona crisis hit Vietnam much harder in 2021 than in 2020? More on this and a little preview of 2022 in ourletter from Vietnam directly from Ho Chi Minh City

Last year, one of the most important trade fairs for real estate and investment in Europe, Expo Real, had to be cancelled due to the pandemic. This year it will be hosted again in Munich. The State of Bremen will also be in attendance from 11 to 13 October 2021 to promote its real estate projects in Bremen and Bremerhaven.

Extreme reactions to new corona virus cases, the triumphant march of meat alternatives and business opportunities for companies in the environment sector – find out more in our Letter from China.

Alternatives to meat and fish, and meat grown in a laboratory, are about to revolutionise our eating habits. In this newsletter, we're going to take a closer look at this industry and showcase ten extremely promising start-ups from around the world.

Holidaying in Turkey in 2021 – might that be possible? How has the Corona crisis affected the Turkish economy? You'll find all this and more in our Spring 2021 country reports.

Gifts of digital money from the government and a region with opportunities for German companies – just some of the points covered in our China newsletter.

to GTAI
News
Employing staff from outside Germany

The Germany Skilled Labour Immigration Act (Fachkräfteeinwanderungsgesetz), which came into force a year ago, is speeding up and simplifying the process for attracting and employing skilled workers from outside Germany. In Bremen, the Gesundheit Nord hospital group has also been able to attract healthcare workers from Mexico, thanks to the German Government's recruitment agreement.

Learn more
News
Bremen Advertises Itself in the United Kingdom

In order to attract companies based in the United Kingdom to locate in Bremen and to strengthen mutual trade relations, Bremeninvest, the foreign brand of WFB Wirtschaftsförderung Bremen GmbH, has been active in London since January 1, 2021.

Working from home instead of in the office? A boom in online rather than retail business? The coronavirus pandemic is accelerating many trends. Silicon Valley is often seen as a forerunner in this development, but also finds value in old practices. Our insights into the United States.

How is Turkey handling the coronavirus crisis? And why is Istanbul attracting investment of nearly US$ 2 billion from Silicon Valley?

What makes Vietnam – a socialist state – so interesting to western companies? In this edition of our country newsletter for Vietnam we seek to answer this question, and we also report on the country’s most exciting start-ups.

Experience Silicon Valley at first hand with Bremeninvest! Tim Ole Jöhnk, our man in Silicon Valley, is inviting representatives from the food and supply chain industries to join a delegation on a visit to Silicon Valley. More on this and other exciting stories in the September newsletter.