To boldly go, and safely return – behind the scenes at Ariane Group

Space travel made in Bremen 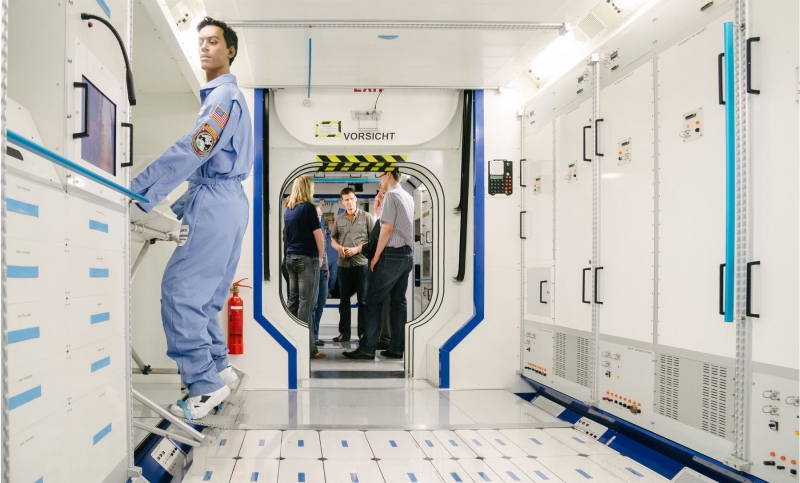 At Airbus Defence and Space, visitors can explore the Columbus module during a guided space tour © Jonas Ginter/BTZ Bremer Touristik-Zentrale

What man and machines are achieving in space is truly impressive. At the launch sites and at home, millions of spectators watch rockets blasting off into the great unknown. But few outsiders get the chance to see what makes all this successful space travel possible. At Bremen Airport-City, rocket engineers work on projects such as the Ariane 5 launch vehicle. We watched experts from the Ariane Group at work.

When it comes to engineering, the aerospace sector is in a league of its own. On a tour of the Ariane Group facility in Bremen we witnessed this for ourselves.

Bremen is the European centre of excellence for manned spaceflight, space robotics and launch vehicles. Here, around 1,000 people are making a significant contribution to global aerospace projects such as the International Space Station, the Columbus laboratory module, the unmanned ATV cargo spacecraft and the Ariane 5 launch vehicle, which provides Europe with independent access to outer space.

The Ariane Group currently manufactures the complete upper stage of the Ariane 5 in Bremen. Together with the VEB (Vehicle Equipment Bay), which represents the ‘brains’ of the rocket, the upper stage forms the rocket’s upper composite. It is fuelled by high-energy liquid hydrogen/liquid oxygen. By August 2016, Airbus Group had achieved 72 consecutive successful launches of the Ariane 5. A fully integrated upper stage leaves the integration hall in Bremen up to eight times a year.

The integration of the upper composite takes place in a clean room with a strict limit on the number of dust particles in the air – in this particular case 100,000 per cubic metre. During integration, even the presence of foreign bodies that are only a fraction of a millimetre in size could have disastrous consequences. As it’s not possible to stage test flights before the actual launch of the rocket to ensure that everything is working correctly, the cleanliness of the integration room is very important, along with endless testing. The Ariane launch vehicles take off from the European spaceport at Kourou in French Guiana. 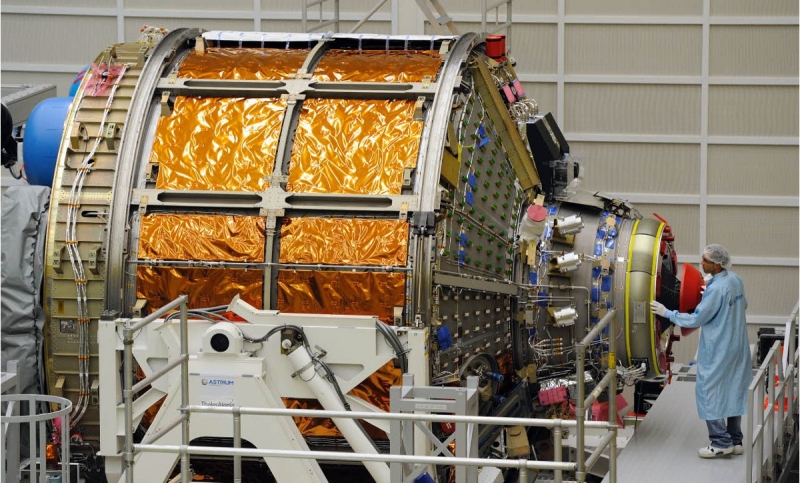 On the floor above, we looked at models of the automated transfer vehicle (ATV) and the International Space Station (ISS). From 2008 to 2015 the ATV supplied the ISS with fuel, oxygen, food, water, spare parts and new equipment. The size of a London double-decker bus, the unmanned cargo craft used to dock with the ISS, which is about the size of a football pitch, at a speed of 28,000 km/h. The ATV was built, integrated and tested in Bremen.

We continue along the ‘planetary way’, where a simulation demonstrates gravity on the different planets by means of trays carrying equal loads. Opposite the entrance to the Columbus module we get to see inside the simulation and diagnosis room, where engineers keep in contact with the ISS. The actual Columbus control centre is near Munich, but the engineers in Bremen receive all of the Columbus data around the clock and can intervene at any time if they detect signs of an anomaly.

On the control room monitors we immediately spotted the rota of the astronaut crew on board the ISS. This gives a minute-by-minute breakdown of their daily routines.

Science in space – the Columbus module from Bremen

The European Space Agency’s (ESA) Columbus space laboratory has its roots in Bremen. The module was developed and built here by Airbus Defence and Space, before being taken to the ISS on board the Atlantis space shuttle in 2008. There it remains an integral component of the space station – and a masterpiece of engineering. The space laboratory is designed for conducting experiments in zero gravity. The life-size replica of the Columbus module shows the different research facilities, such as the Biolab, where experiments with cells, tissue cultures, microorganisms, small plants and invertebrates are carried out. The Fluid Science Laboratory (FSL) is used to analyse fluid dynamics and other phenomena exhibited by liquids. 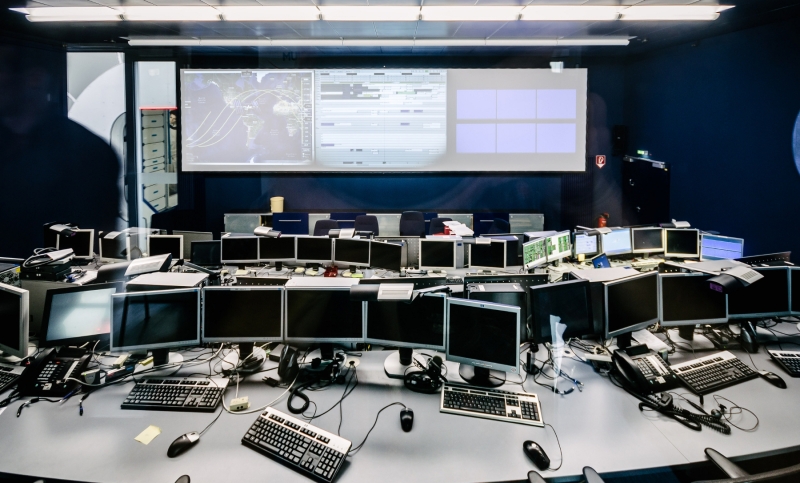 We started to feel a bit peculiar as we entered the module – a sure sign of claustrophobia. Now we know just how cramped conditions are on the ISS, and how well organised the work there needs to be. Everything has its place inside the space station, thanks to an ingenious system of flaps and drawers, research paraphernalia and racks, along with fixing points and handles. In zero gravity there is no such thing as ‘up’ or ‘down’.

Not everyone gets to be an astronaut

Those who work here have gone through some tough training. As the ISS zooms over our heads at an almost unimaginable 28,000 kilometres an hour, around 400 kilometres above the ground and orbiting the earth once every 90 minutes, it is manned by up to six astronauts at a time. The first step towards becoming an astronaut is one year of basic training. This is followed by a year of advanced training in which candidates must continuously prove themselves in tests and exercises in order to have a chance of qualifying for a trip to space. This can take several years. In 2008, more than 8,400 aspiring astronauts from all across Europe applied, but only six of them made the final cut.

As our tour of the sacred halls of the Ariane Group came to an end, we encountered a remnant from the 1980s at the exit of the Columbus module: Spacelab, the ‘father of Columbus’, as it is affectionately known to the employees here. After 22 missions into space, it now stands as a part of space history in the Spacelab hall in Bremen.

More information on the Ariane Group is available at www.ariane.group/de, the contact for the space sector at Bremeninvest is Dr Barbara Cembella, tel: +49 (0)421 9600-340, barbara.cembella@aviaspace-bremen.de.

More information on Bremen as a centre for the aerospace industry can be found in our overview section.

If you need to rotate a satellite in space, you will almost certainly be using technology from Bremen. The design is ingenious – and that is why practically every spacefaring nation on Earth has an important entry in its address book under the letter Z.

Policies that boost innovation aim to support the ongoing structural change in industrial companies, SMEs and related service providers. Promoting promising technologies is a particularly important part of this. Some technologies feed into each other, ...

The ESA Business Incubation Centre (BIC) Northern Germany is a new beacon project for the aerospace sector in Bremen.

The path into space begins in Bremen. Production on the upper stage of the Ariane 6, the latest generation of Europe’s launch vehicle, is set to start shortly next to Bremen Airport. The launcher is intended to guarantee Europe independent access to space.

Learn more
Aerospace
The space industry in Bremen: living and working in the Hanseatic city

Nowhere in Germany is bigger in the aerospace industry than Bremen. We spoke to Bremen-based scientists working on the space side of aerospace about their projects, their life in the city, and their tips on where to live and where to visit.

to the personal stories
Science
Bringing the universe to Bremen

Every year, the movers and shakers of the space industry gather at the International Astronautical Congress (IAC). From 1 to 5 October, it will be Bremen’s turn to host the event. A team from the Center of Applied Space Technology and ...

The exploration of celestial bodies, such as Mars, Mercury and the moon, requires detailed geological maps. An international research project is now laying the foundations for this. Bremen-based geologist Dr Angelo Pio Rossi is one of the initiators of the data project.

The construction of the complex new EcoMaT research and technology centre at Airport-Stadt Bremen is at an advanced stage. Prospective tenants include Airbus and Testia, as well as a number of leading medium-sized businesses and scientific institutions. After the topping-out ceremony, work will get under way on the interior of the building.

Space is not just a man’s business. The global network Women in Aerospace (WIA) aims to increase women’s leadership opportunities and visibility in the space industry – also in Bremen. An interview with Antonella Sgambati und Michela Cantisani, coordinators of WIA Bremen.

Read more on Bremen.de
Aerospace
Artificial intelligence made in Bremen

Artificial intelligence isn’t just a matter of computer programming. It’s a challenging question: how can a robot successfully deal with real, unpredictable surroundings? For 30 years, solutions to this problem have been developed at the German Research Center for Artificial Intelligence (DFKI). This Bremen-based facility has been so successful that its employees are now founding their own company.

Bremen Airport-Stadt is an international transport hub and a centre of excellence for the aerospace industry and for research and learning. It occupies a leading position among Germany’s airport locations. Here are ten benefits that Bremen Airport-Stadt offers.

One day, astronauts will live and carry out research on the moon – and even a colony on Mars is no longer the distant utopian dream it once was. But how will people be able to live in an extraterrestrial environment? The Center of Applied Space Technology and Microgravity (ZARM) at the University of Bremen is working on a solution.

If astronauts want to get all the way to Mars one day, they’ll need food supplies for the journey. Part of the solution could be to grow their own grains and bake bread themselves. Bremen start-up Bake in Space is on the verge of making this vision a reality.

A great deal of manual labour goes into aircraft construction. Despite this – or perhaps even because of it – Airbus is changing its approach to make increased use of digital technologies. It’s also researching the applications of new manufacturing technologies such as 3D printing. And not a moment too soon, as Airbus’ site manager in Bremen, Dr André Walter, explains in our interview.

In December 2016 ministers from the European Space Agency (ESA) member states met to determine the roadmap for the European space sector for the years ahead. Baden-Württemberg, Bavaria and Bremen submitted joint recommendations. In the following interview Dr Peter Vits, Bremen's State Coordinator for the Space Sector, talks about Bremen's strengths and opportunities.

Learn more
Aerospace
Take-off for Bremen: what makes the city a hub for aerospace expertise

The sky is not the limit, at least not in Bremen. All parts of the aerospace sector are represented in the city, from R&D to production. Aeroplane wings, Ariane rockets and Galileo satellites – Bremen is one of the leading locations in the international aerospace industry. Here are five factors behind Bremen’s story of success.

In 2015 Bremen won the right to host the International Astronautical Congress for the second time, after having successfully held the event in 2003. Its bid was the result of a collaboration between the Bremen regional government and Bremen’s space industry and space research sector. Event partners include the Federal Ministry for Economic Affairs and Energy and the German Aerospace Centre.

What makes an aircraft fly? You don't have to be an aerospace expert to be fascinated by what goes on behind the scenes at one of the largest aircraft construction companies in the world. The Airbus Group in Bremen turns the dream of flying into ...