The many importers, laboratories, researchers and ‘bee hire’ companies based in Bremen have made it the secret honey capital

Honey is sweet and full of trace elements, minerals and vitamins. This healthy treat is particularly special to Bremen, as the city is home to a whole host of importers, researchers, laboratories and entrepreneurs focused on bees and honey. No surprise then that Bremen is known as the honey capital. 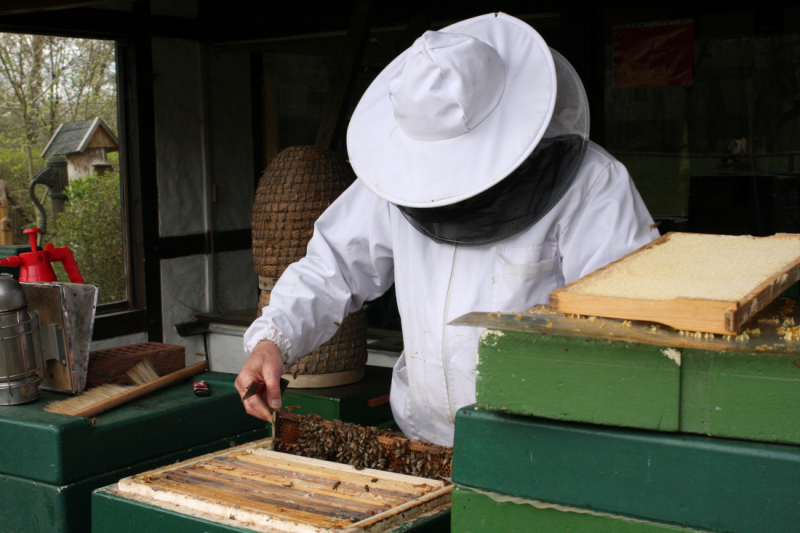 You can watch the members of Bremer Imkerverein von 1875, the local beekeeping society, at work at Lür-Kropp-Hof farm in Bremen-Oberneuland. © WFB/Berit Böhme

The city of honey importers and bee researchers

Bremen is associated with many things, including football, the Bremen Town Musicians, space exploration, coffee, cars and beer. But Bremen is also known as the honey capital. This is partly due to its location, with honey from all over the world being transshipped at the city’s ports. Bremen is also home to the highest number of honey companies, such as Walter Lang GmbH, Europe’s largest importer of organic honey, and Dewin GmbH, which imports organic honey from China.

But the city’s rise to honey capital status is also due in large part to the research community, in particular biologist Dr Dorothea Brückner. The bee expert is working with members of Bremen University’s cognitive neuroinformatics team on the Bee Observer project.

Big brother in the bee colony

The researchers are investigating how factors such as humidity, temperature and acoustics influence the behaviour and health of bee colonies. The beehives have been covered in sensors and wired up to collect data. The project, funded by the Federal Ministry of Education and Research, is still in its pilot phase. The goal of the project is to develop an app that can provide beekeepers with information about the condition of their bee colony without having to open the hive. This is what they have to do currently, and it causes the bees stress. As part of the pilot project, the researchers have installed sensors in twelve bee colonies, most of which are located next to the institute for neuroinformatics on the university campus. Over the course of the summer, amateur beekeepers will be kitting out a further 200 colonies with sensors. Brückner believes this collaboration between researchers and the general public on the Bee Observer project is a fresh and forward-looking approach. The application of cutting edge technology is giving beekeeping a new dimension. “It’s becoming a little more hip,” Brückner says. 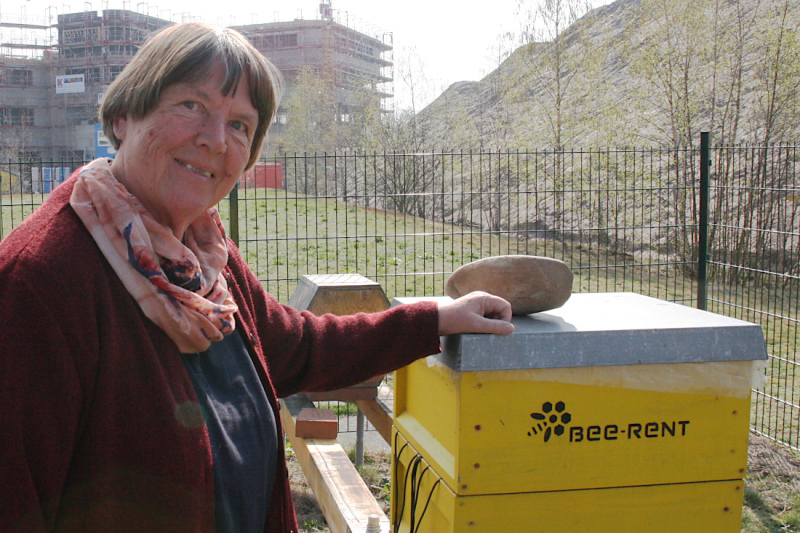 Dorothea Brückner and her colleagues in neuroinformatics have set up sensors in the hives to collect as much data as possible. Bremen-based start-up Bee Rent has provided a bee colony for the project. © WFB/Berit Böhme

Bees are as intelligent as dogs

In the summer, a colony can consist of around 50,000 bees: “A queen, tens of thousands of workers and, at certain times of the year, hundreds of drones,” says Brückner. “The queen can live for four years or even longer.” Summer bees hatch from May to June and work so hard that they only live for around six weeks. Winter bees are considerable less busy and can live for six months. Bees prefer dry and sunny conditions, and one of their survival strategies is to avoid downpours. “A large rain drop can kill a bee. They are extraordinary beings – bees are social insects,” says Brückner. In her eyes, a bee colony is a superorganism, as the various structures work together. August-Wilhelm Schinkel, chairman of Bremer Imkerverein von 1875, the local beekeeping society, adds: “A bee colony can match any dog for intelligence.”

The number of bee colonies and beekeepers is on the rise

Schinkel is excited by the growing interest in beekeeping. According to Deutscher Imkerbund, the German Beekeepers Association, there were around 880,000 bee colonies in Germany in 2017. A year later, that figure was 915,000. “There’s certainly a buzz in the air,” says a delighted Schinkel. “Beekeeping is evolving, and our membership is becoming younger and more female.” Over the last four years, Bremer Imkerverein has seen its membership double to 310, and it claims to be the largest society in northern Germany.

The society runs a small museum and provides education on bees at the idyllic Lür-Kropp-Hof farm in Bremen-Oberneuland. The beekeepers welcome around 30 to 40 school groups every year. Volunteers also take show hives on visits to schools so that children can learn about the allocation of roles in the bee colony in a fun way and discover the secrets of the waggle dance. “When the children go home after school, they’re no longer afraid of bees,” Schinkel is happy to report.

Patience is the key for young beekeepers

It is not just school children who can learn from the experienced beekeepers, but also novice beekeepers. “Our tried-and-tested approach is to assign a coach to novice beekeepers. The lessons are spread across the year so that the novices can familiarise themselves with the various jobs,” says Schinkel. But there is always plenty more to learn, even after completing the beekeeping course. “There are so many things to know and do that it can take around five years to become reasonably competent,” he adds. 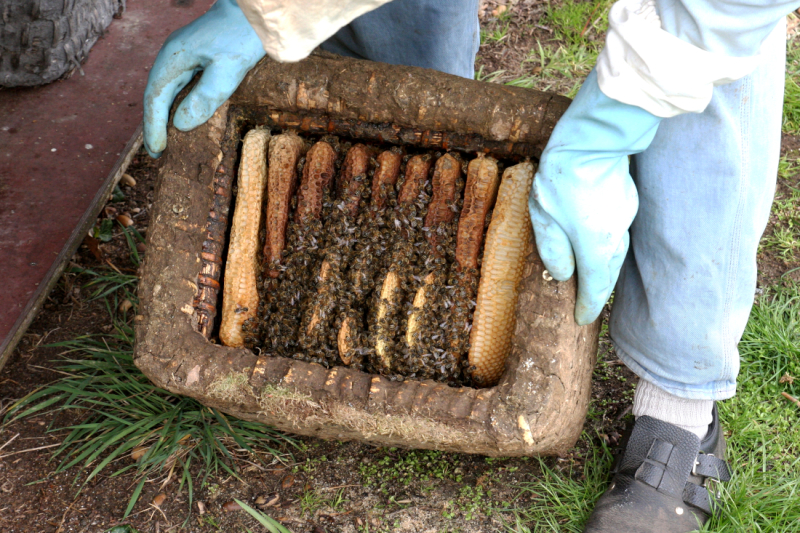 Bremer Imkerverein has 310 active members. The beekeepers are preserving tradition by using old-style beehives alongside the more modern ones. © WFB/Berit Böhme

Local beekeepers produce nowhere near enough to meet demand across Germany. According to the Federal Office for Agriculture and Food, Germans consumed 1.1 kilograms of honey per head in 2017 – 15 percent more than in the previous year. In 2018, the members of the German Beekeepers Association produced around 26,000 tonnes of honey. According to the Germany Honey Association, around 85,000 tonnes of honey are imported.

Bee hire as part of an all-inclusive package

You don’t have to become a beekeeper yourself if you want to support the bee population and enjoy your own honey. You could also turn to Dieter Schimanski in Bremen. Bee Rent, the company he founded in 2015, leases bee colonies as part of an all-inclusive package which is particularly popular with companies. His service includes setting up beehives on the company premises, looking after them and removing and packaging the honey. “We visit our customers ten to 15 times a year as the bees need a lot of care,” he says.

Radio Bremen was the first customer

The idea has been well received, and Radio Bremen was one of his first customers. “The last time around, Radio Bremen had 54kg of honey,” says a delighted Schimanski. Bee Rent now looks after 140 bee colonies, plus the colonies from franchisees in other regions. The entrepreneur is happy to report that some bee renters and their employees have shown a personal interest in beekeeping. Aside from making his business a success, he is very keen on providing environmental education. He particularly enjoys running workshops for school groups, for example at the Fritz Reuter school in Bremerhaven. Its Bee Rent hive has been sponsored by local logistics company BLG.

Schimanski has provided a colony to Dorothea Brückner’s bee project on Bremen University’s campus, where the bees are working and buzzing in the name of science.

Bremen is a stronghold of robotics. From medium-sized companies to global players, the corporate landscape is broadly based. What is striking here is the numerous areas of application - we have 10 examples

Learn more
Startups
What Happens In the Supermarket at Night

This robot's job doesn't start until the last member of staff leaves the store at the end of the working day: Roaming through the shelves, he helps physical stores to compete with online retailers.

Learn more
Digitization
What impact will artificial intelligence have on our world in 2030?

Intelligent robots, self-driving cars, smart chatbots – is this what our world will look like in 2030? We asked representatives from the research and business sectors in Bremen for their thoughts on the future impact of artificial intelligence.

How do new, innovative companies come into being? Sometimes with a start-up directly out of the university or college. Eight Bremen companies that have outgrown the nursery of science.

Fibre composites have become a permanent fixture in everyday life. The Bremen Fibre Institute (FIBRE) has been working on these materials for five decades, and has gained another strong partner this year in the form of the ECOMAT research centre.

Learn more
Aerospace
The space industry in Bremen: living and working in the Hanseatic city

Nowhere in Germany is bigger in the aerospace industry than Bremen. We spoke to Bremen-based scientists working on the space side of aerospace about their projects, their life in the city, and their tips on where to live and where to visit.

to the personal stories
Science
Bringing the universe to Bremen

Every year, the movers and shakers of the space industry gather at the International Astronautical Congress (IAC). From 1 to 5 October, it will be Bremen’s turn to host the event. A team from the Center of Applied Space Technology and ...

Good ideas may be rare, but imitators are easy to find. Which makes it all the more important to secure patents for new inventions. Bremen-based InnoWi helps companies and the research community to register new patents, and is also on hand to provide advice and access to funding.

From the idea to the patent
Aerospace
Surveying space

The exploration of celestial bodies, such as Mars, Mercury and the moon, requires detailed geological maps. An international research project is now laying the foundations for this. Bremen-based geologist Dr Angelo Pio Rossi is one of the initiators of the data project.

Space is not just a man’s business. The global network Women in Aerospace (WIA) aims to increase women’s leadership opportunities and visibility in the space industry – also in Bremen. An interview with Antonella Sgambati und Michela Cantisani, coordinators of WIA Bremen.

Read more on Bremen.de
Science
Science and research in Bremen: living and working in the Hanseatic city

There are 35,000 students at eight universities in Bremen, as well as numerous research establishments, all of which work together successfully. It is a dynamic centre of science and learning. We spoke to a number of researchers and academics to find out what it’s like to live and work in Bremen and Bremerhaven.

One day, astronauts will live and carry out research on the moon – and even a colony on Mars is no longer the distant utopian dream it once was. But how will people be able to live in an extraterrestrial environment? The Center of Applied Space Technology and Microgravity (ZARM) at the University of Bremen is working on a solution.